The End of Romance 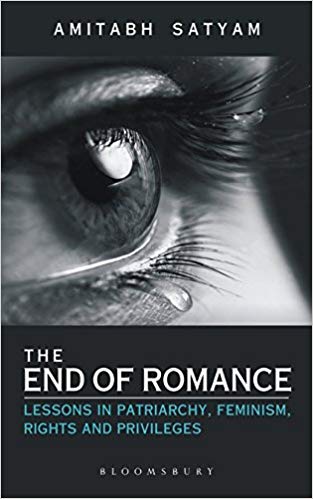 Two genders made by nature coexisted comfortably forever, till about a few hundred years ago when men and women started identifying themselves differently. These identities started hardening over time and today they appear to be a different species in many situations.

Sometimes laugh-out-loud, at times, deeply poignant, and at other times, provoking and questioning, The End of Romance is a fantastic, one-of-its-kind take on patriarchy and feminism, rights and privileges, abuse and consent, and cultures and laws related to men-women conflicts.

Peppered with anecdotes, real-life incidents and everyday stories, the book discusses the natural, cultural and religious influences on the man-woman relationship and how this has evolved over time. Asking questions few would ever utter: Is our society increasingly becoming anti-men? If so, will this lead to any good? Are gender dynamics always tilted only to benefit one gender? Can we ever achieve equality? These are debated with an analysis of the privileges of women and the abuse of men, a discussion on the prevailing myths, followed by recommendations on how the relationship can be brought back to equal.

Unabashed, hilarious, and at times caustic, The End of Romance signals what most of us miss: Oppressive societies do not survive, whoever it may benefit at the moment.

Who is this book for ?

Social and behavioural scientists to help them conduct meaningful research.

Young women and men Who are yet to experience the dynamics of gender relations.

Men and women, who seek a constructive and meaningful partnership.

Women who believed men have oppressed them.Women who seek entitlements.

Men who are persecuted by the system.

Lawmakers who must maintain a societal equilibrium while framing laws.
Professionals in the government departments who wish to understand how their work and priorities will transform.

Law enforcement officials who must remove any personal bias to ensure fairness to all.
Justice delivery agentswho must ensure confidence in the institutions of the country.

Activists who highlight the structural distortion of the society.

Knowledge seekers – Who wish to understand the movement of privileges.

Amitabh Satyam is the Chief Mentor at Smart Transformations. A graduate of the Indian Institute of Technology, Kanpur with an MBA from Fisher College of Business, USA, Amitabh was earlier the Managing Partner at SAP and the global Consulting Leader for Telecom and IoT at IBM.

He started his career on Wall Street as an investment analyst at Morgan Stanley Smith Barney. Later, he was the Operations Head at Reliance Infocomm, Managing Director at MobiApps and Vice President at Siemens. Amitabh has also taught at The Ohio State University and at Rider University in the USA for four years.

The General Theory
of Management